Who is the Father of Computer ?

Why is Charles Babbage called the Father of Computer?

The father of the computer, Charles Babbage, was the first to invent the computer as an arithmetic logic unit i.e. computer program. By the way, even before the advent of the word computer in the world, there was some invention related to technology i.e. calculation. Which is known as a calculator machine.

But the father of the computer, that is, the father of the word computer, when one size and one structure and the whole credit goes to Charles Babbage for making it a machine to do computer related tasks. Because he was the first to prepare such a machine. On which the work of Programming Arithmetic Logic Unit started.

Who Invented the Computer?

The computer was invented by Charles Babbage in 1822. Many scientists from time to time laid the foundation of modern computer with computer related inventions. This process continued till the creation of ‘ENIAC’ in the year 1945. But the father of computer invention is called Charles Bawej.

Charles Babbage built an analytical engine capable of performing mathematical calculations. It was a mechanical machine. It was a bigger machine than the room, which cost a lot to make. This cost was borne by the British Government. This engine was powered by steam, in which shafts, cranks, etc. were attached. It was huge in size as well as heavy. Later on he designed another machine called differential engine. Later this machine became the basis of modern computer. Charles Babbage is also called the father of computer because he designed the first programming computer. 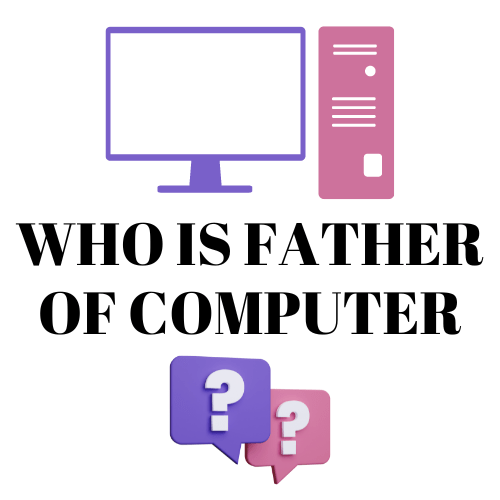 Who was Charles Babbage?

Charles Babbage was born on 26 December 1791 in London, England. He was a resident of England. He was from a wealthy family and his father’s name was Benjamin Babbage, who was a banker. Since childhood, he was very fond of mathematical calculations.

Who had very deep knowledge related to mathematics engineering economy, computer science politics. He is also known in the world as a genius and inventor. Whom we know as Father of Computer.

Charles Babbage had his early education at home. A private tutor used to come to teach him. Babbage was very smart in mathematics. His childhood interest was the creation of maths and computer related works and his great affinity for English.

He was also enrolled for education at Holmwood School. He used to get maths books from the library present here. He also enjoyed doing difficult math calculations. Charles Babbage joined Trinity College, Cambridge University for further studies in 1811 AD. He completed his graduation from Cambridge’s Peterhouse College. Charles Babbage gained most fame in the fields of mathematics and computers.

Charles Bavez was married in 1814 to a woman named Georgiana Whitmore. They had a total of 8 children, out of which only 3 children were able to survive.

Charles Babbage lectured at the Royal Institution on Astronomy in 1815, and was elected a Fellow of the Royal Society in 1816. After graduating, he applied for positions unsuccessfully and had little in the way of a career. In 1816 he was a candidate for a teaching job at Highleybury College.

He had recommendations from James Ivory and John Playfair, but lost to Henry Walter. In 1819 Charles Babbage and Herschel visited Paris and the Society of Arcycle, meeting prominent French mathematicians and physicists.

That year Babbage applied to be professor at the University of Edinburgh, with the recommendation of Pierre Simon Laplace the position went to William Wallace.

In 1820, Charles founded the Royal Astronomical Society. Its purpose was to make astrological calculations easier. In 1824, he built an engine to calculate mathematical and astronomical tables, which he named the difference engine.

Along with Herschel, Babbage worked on the electrodynamics of the rotation of Arago, published in 1825. His explanation was only transitional, raised and elaborated by Michael Faraday. This phenomenon is now part of the theory of eddy currents, and Babbage and Herschel missed some clues to the unification of electromagnetic theory, which remained close to Ampanre’s law of force.

Babbage purchased the Besurial Tables of George Berrett, who died in 1821 leaving unpublished work, and surveyed in 1826 a comparative view of the various institutions for life assurance. This interest followed a project to establish an insurance company, inspired by Francis Bailey. Babbage calculated the actuarial tables for that plan using the Judicial Society mortality data from 1762 onwards.

It took Charles Babbage time to make the difference engine, many machines were needed to make it for the wheels, cranks and gears etc. and due to the money also Babbage designed it himself. But it could not be completed due to paucity of some money.

After this, he started making such a machine again in 1847-1849, which he named ‘Difference Engine 2’. But this too could not be finished for some reason, but Charles learned a lot from it and after that made a bigger machine named ‘Analytical Engine’.

Charles Babbage was instrumental in founding the Royal Astronomical Society in 1820, initially known as the Astronomical Society of London. Its original purpose was to reduce astronomical calculations to a more standard form and to transmit data. These directions were closely associated with Babbage’s views on computation, and he won its gold medal cited ‘for the invention of an engine for computing mathematical and astronomical tables’.

Babbage’s motivation for correcting errors in tables by mechanization was common as Dionysius Lardner wrote about in the Edinburgh Review (under Babbage’s guidance) in 1834. Charles Babbage’s own account of the origin of the difference engine begins with the Astronomical Society’s desire to improve the Nautical Almanac.

Babbage and Herschel were asked to oversee a test project to recalculate some of those tables. This happened in the year 1821 or 1822, and it was also the time when Charles Babbage formulated his idea for mechanical calculations.

A Part of Differential Engine

Charles Babbage studied the needs of establishing a modern postal system with his friend Thomas Frederick Colby. It concluded that there should be a uniform rate, which was implemented in 1839 with the introduction of the Uniform Fourpenny Post, replaced by the Uniform Penny Post 39. Colby was one of the founding groups of the Society in the year 1840. He was also in charge of the Survey of Ireland. Herschel and Babbage were present in a well-known operation to remeasure the Lough Foyle baseline.

This machine is the reason for today’s modern computer. The Analytical Engine was powered by punch cards that were punched and where could the world’s first computer go. It was very heavy and almost as big as a house. It required a lot of money to make it, which was fulfilled by the US government.

Charles Babbage was honored with a Gold Medal from the Astronomical Society of London for his inventions.

Charles Babbage, the father of the computer, died in 1871 in the city of Marleybone, London, England.

What devices were Invented before Computers?

Multiplication could not be done by that machine. Used only for addition works. It was invented in the form of the world’s first machine and a calculator. After that gradually some calculator machine was invented while developing further in it. In which some more mathematical operations were started and after that the machine was prepared as a computer for the first time in the year 1833 by Charles Babbage, the father of the computer.

In which the name of mathematical tomorrow, Arithmetic Logic Unit and programming language were also used. Since then till today we have been using computer. Charles Babbage is known as the inventor of the computer machine.

Who is called the Father of Personal Computer?

The father of the personal computer was Henry Edward Roberts.

Q. 1 Who is the father of computer?

Q. 3 Who was Charles Babbage?

Q. 4 Who is the father of computer?

Q. 5 Who invented the computer?

Q. 6 When was Charles Babbage born?

Q. 7 Who was the father of Charles Babbage?

Q. 8 Where was Charles Babbage born?

Q. 10 Who is the father of personal computer?

Answer – Ada Lovelace is called the mother of computer. Who was an English mathematician and writer. He created it by Charles Babbage. He worked on what is called a computer and was the first to understand that this machine can do many other things along with ‘pure computation’.

Q. 12 Who is the father of modern computer?

Answer – Alan Turing is called the father of modern computer, who was a British mathematician and logician. He was born on 23 June 1912 in London, England. He invented the Turing machine, which is responsible for the concept of algorithms and computation.

Q. 13 Who is the father of Indian super computer?

Answer – Vijay Bhatkar is known as the father of the Indian supercomputer, who led the development of the ultimate supercomputer in India.

Charles Babbage is called the father of computer. By reading this article you must have come to know about Charles Babbage. He has made many inventions in his life. The world will always remember him for his invention. If you have any doubt related to this article then you can ask in comment, your doubt will be cleared.

If you liked this article, do share it with your friends so they can know about Charles Babbage.