Read : Central Bank Digital Currency India, Hello friends, in today’s article we will give you information about CBDC. CBDC In future every citizen of India will have their own digital currency. Central Banking Digital Currency (CBDC) will work as an online virtual currency. The Reserve Bank of India (RBI) has started a pilot program of digital rupee in the wholesale segment with effect from November 1, 2022. Not many people know about this new currency. Therefore, complete information about CBDC has been given in this article. So let us know what is CBDC?

What is Central Bank Digital Currency?

In today’s time we can easily see the role of digital currency all around us. Citizens of India are now learning to earn income by learning new technologies. Experts have claimed that in future every citizen of India will have their own digital currency. 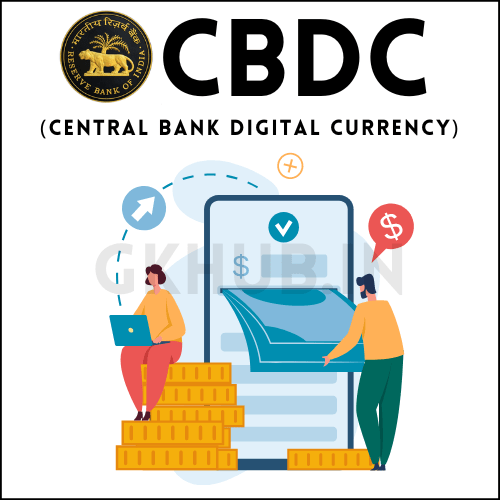 The most important thing about this currency will be that it will be given full recognition by the central government. Along with this, this digital currency can be spent through many institutions and companies. Many well-known financial institutions of the country will also support this Indian Digital Currency. This currency will be same as physical currency but it cannot be withdrawn from the account as hard copy currency. Knowledgeable If you have to make some purchase or payment for any service in future then you can use this digital currency.

The Reserve Bank of India (RBI) has started a pilot program of digital rupee in the wholesale segment with effect from November 1, 2022, the central bank said. The regulator has roped in 9 banks to participate in the pilot.

The blue print for the launch of digital currency by the end of this year has been prepared by Shri Shashikant Das, the other RBI Governor, Reserve Bank of India.

According to the concept note issued by RBI, now we know what can be the forms of CBDC – 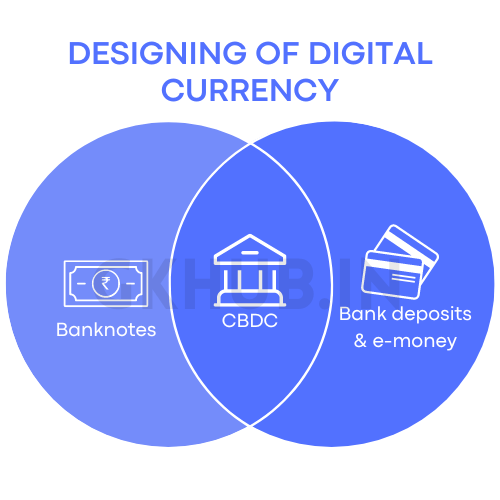 Role of RBI and Private Players

There is a high possibility that RBI may introduce retail CBDC to the general public in the country. This will be a historic change/departure of RBI in its existing operational system. Because in the current system RBI has no direct relationship with the end consumers.

In case of direct model, RBI will be responsible for all new activities which will require new competencies within the bank. Alternatively, RBI may consider a two-tier model, where the role of RBI in operations will be less. Wherein most consumer services can be outsourced to intermediaries.

However, even under this model, the RBI will need to develop functions such as monitoring and risk management, and put in place efficient and robust systems to deal with potential CBDC disruptions.

How will CBDC work? 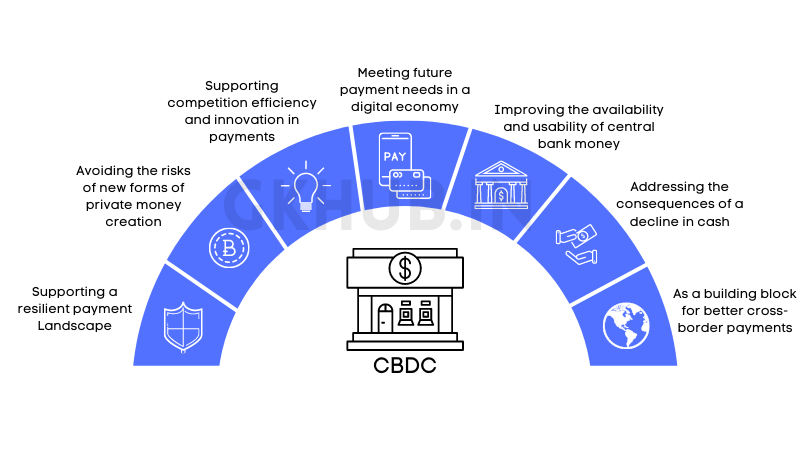 How will CBDC help?

The introduction of a CBDC has the potential to provide significant benefits, such as less reliance on cash, higher coinage profits due to lower transaction costs, and lower settlement risk. 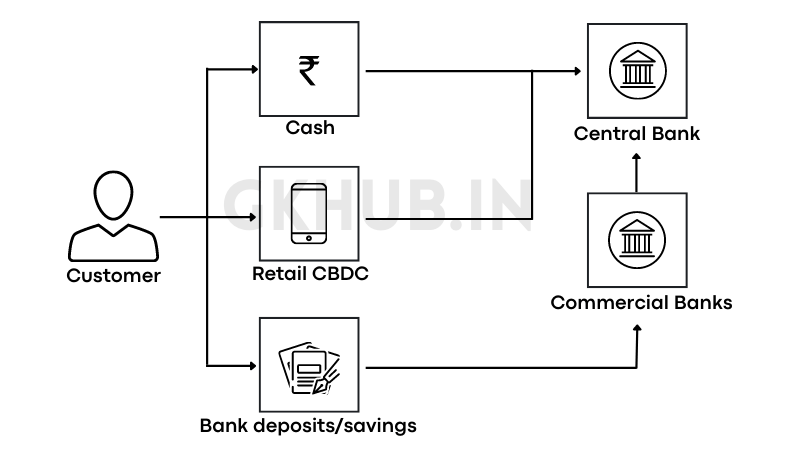 The introduction of a CBDC will likely pave the way for a more robust, efficient, reliable, regulated and legal currency-based payment option. 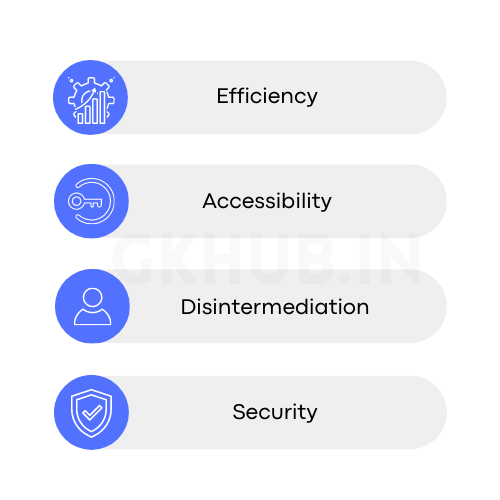 CBDC has the following objectives-

Supplementary to cash – CBDC can be introduced in the country not as a substitute for cash (cash) but as a supplement. With the introduction of digital currency, dependence on cash will be reduced and the expenditure in printing currency will also be curbed. Unlike countries such as the UK and Sweden, cash is still more prevalent in India. Sweden and the UK have a cash in circulation (cash in circulation) to GDP ratio of 2.3 per cent and 3.4 per cent, respectively, compared to 12 per cent in India. For the objective to be successful, India will have to continuously evaluate cash use and payment habits of citizens after the introduction of the CBDC.

India still has 190 million people who do not have bank accounts (as of 2017) due to the huge population. To an extent, CBDCs can be an option to promote financial inclusion.

Promote digitization of the economy –

The introduction of CBDCs can improve the efficiency of payment systems as well as boost competition and innovation in the sector. In the last few years in India, many steps have been taken to promote digital payments. This includes providing real-time and round-the-clock payment options to users, promoting competition through NPCI, developing a new framework for retail payments and providing low-cost payments. Here, it will be important to assess whether a retail CBDC can provide any additional benefits to the digitization of the economy and, if so, how it can fit into the existing payment system.

CBDC can improve the country’s capacity to combat financial crime such as money laundering and tax evasion. Because CBDC systems may be able to track and identify transactions. The design of a CBDC is important to accomplish this purpose, as it will allow traceability.

CBDCs can also play a big role in increasing the efficiency of cross-border payment systems. In case of foreign exchange transactions in this system, there will be no delay in settlement irrespective of time zone.

There are many benefits of CBDC, let’s know about its benefits –

Following are the challenges of CBDC –

The central bank will potentially store large amounts of data relating to user transactions that pose a risk to the individual’s privacy/privacy.

This has serious implications as transactions in digital currencies are not able to protect the level of privacy of users as compared to cash transactions.

Compromise of credit is the main issue in this.

If sufficiently large and broad-based CBDCs change, it could affect a bank’s ability to return funds in credit arbitrage.

In case e-cash becomes popular and the Reserve Bank of India (RBI) does not impose any limit on the amount that can be stored in a mobile wallet, weak banks will be able to maintain low-cost deposits as well. can struggle.

Rapid obsolescence of the technology can pose a threat to the CBDCs ecosystem. The result may be incurring high cost of upgrades.

Employees will need to be retrained and prepared to function well for CBDCs as intermediaries have operational risks.

The cost of advanced cybersecurity vulnerability testing and protecting firewalls.

Operating burden and cost for the central bank in managing CBDCs.

CBDC can be structured as ‘token-based’ or ‘account-based’. A token-based CBDC is a bearer instrument like banknotes. Which means that whoever holds the tokens at a given point in time is considered their owner. In contrast, an account-based system requires the maintenance of records.

The balances and transactions of all holders of the CBDC indicate the ownership of and monetary. In a token-based CBDC, the person receiving the token will verify that his or her ownership of the token is genuine, whereas in an account-based CBDC, an intermediary verifies one’s identity.

Considering the features offered by both forms of CBDC, it is a token-based CBDC.

Viewed as the preferred mode for CBDC-R as it will be closer to real cash, whereas for account-based CBDC-W, CBDC may be considered.

The government of any country has no control in this. The number of crypto investors and traders is also increasing rapidly in India. Many exchanges have also started. From where you can buy and sell these crypto currencies. Although there is a lot of danger in this, but still many people have benefited from it to millions and crores of rupees.

RBI has already said that the concept of bitcoin may not be suitable for RBI, hence it is considering to bring its own digital currency CBDC. 86% of central banks in the world are conducting research on CBDCs. Of these, 60% are being used by central banks and 14% of banks have started pilot projects of CBDCs. The US has also introduced its own digital currency i.e. Tether, which is paired with the dollar.

2. Is CBDC a fiat currency?

Ans:- Yes, it is a legal currency.

3. Which is the first country in the world to issue CBDC?

4. Who will have the right to supervise it?

Ans:- This right will be with the Reserve Bank.

5. Can it be transferred through mobile?

6. Is CBDC a cryptocurrency?

Ans:- The CBDC will be backed by Distributed Ledger Technology (DLT), but it will be a licensed blockchain that differentiates it from crypto assets that are not licensed, with the Central Monetary Authority having control of the blockchain. The use of paper currency is continuously decreasing, now RBI wants to make its electronic form more popular. Digital currency will be more efficient and will help in avoiding the dangers and pitfalls of private currency. Digital currencies cannot be burned or damaged, so once issued they will always be there.

By reading this article you must have come to know about CBDC. If you have any doubt related to this article then you can ask in comment, your doubt will be cleared.

If you liked this article then do share it with your friends so that they can know about CBDC.

What is Mpin Number

How to Vote India