Monkey Pox – Poxvirus: Symptoms, Spreads, Treatment : Hello friends, in today’s article we will give you information about a virus. The name of this virus is monkey pox. This virus is continuously spreading. Many people have fallen prey to this disease.

Today we will tell you –

And do we need to be afraid of this disease. So let’s know what is monkeypox– 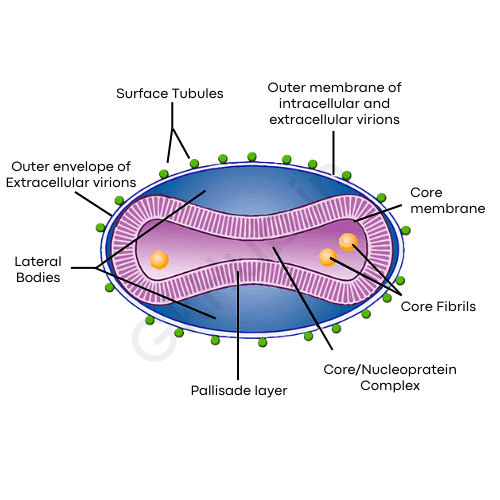 The world had not even fully recovered from the corona epidemic that a new virus has scared the world. Whose name is – monkeypox. This virus has spread to more than 19 countries including America Canada Australia. Monkeypox virus is spread from animals to humans. This virus causes small pox on the body. But the treatment of this disease is possible, so there is definitely a need to be afraid of these diseases.

Monkeypox emerged after a serious illness after smallpox was eradicated. Monkeypox is a double-stranded DNA virus that belongs to the orthopox virus of the family Pox Viridae. Although there is no need to be afraid of this disease, but seeing it, people get scared.

How does the monkey pox virus spread? 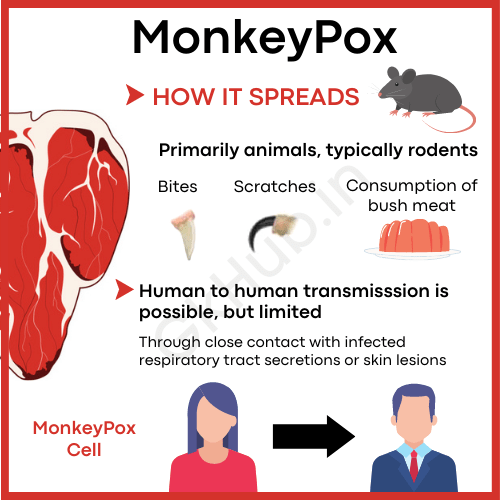 Monkeypox infection can also spread through the eyes, nose, mouth. It can also happen through any object the patient has touched. For example, it spreads by touching the bedding, clothes, or utensils of an infected person. Apart from this, this virus is also caused by the bite of any animal like squirrel, rat, monkey, or by touching their body. Nothing is definitively known about the history of monkeypox. Training is going on on this and it is also possible to treat it.

Symptoms of monkeypox begin to appear in 6 to 12 days and the disease lasts for 5 to 21 days. Its symptoms are as follows-

Small pox comes out on the skin due to monkeypox. These small pox are more on the face and hands and feet. Small pox is more common on the face, palms of the hands and under the feet. The first thing that occurs when monkeypox is fever.

Then small pox starts forming on the body and the lymph node becomes swollen. Monkeypox virus is different from measles, scabies, skin infections, allergies and smallpox. In this disease, there are diseases related to the skin, which last for 2 to 3 weeks.

How is MonkeyPox Virus Detected?

Apart from this, monkeypox virus can be detected in many ways. Its initial symptoms are like normal diseases. This virus can also be detected by symptoms such as sore throat, muscle pain, very severe headache and fever.

It is now easier to treat the monkeypox virus. Vaccines and treatment for this virus are available in hospitals. This virus is very similar to smallpox. This virus also matches the virus that causes smallpox. That’s why smallpox vaccines are also considered very effective in monkeypox.

The United States Centers for Disease Control and Prevention states that there is currently no treatment for monkeypox, but its spread can be controlled by taking medication. There are medicines available in the market which are no proofed but they can be used for monkeypox and they are also very effective. Such as ST-246, cidofovir and vaccinia immunoglobulin etc. Monkeypox infection can be prevented by using all of these. 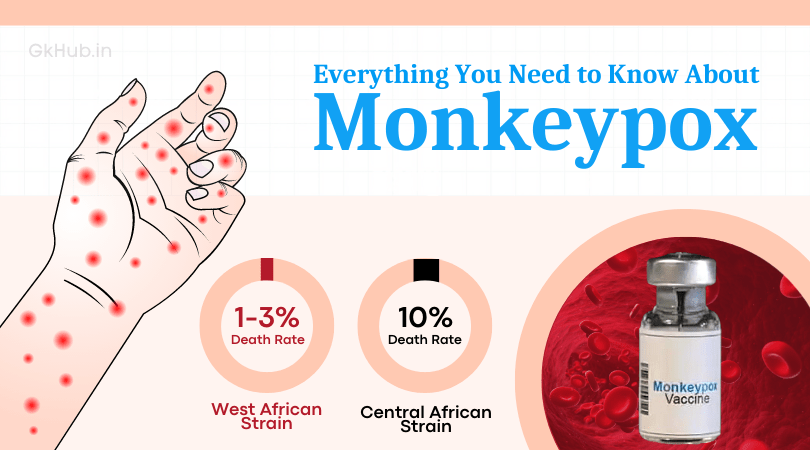 Danish pharmaceutical company Bavarian Nordic has made a vaccine for the treatment of monkeypox virus. This vaccine is multi-nationally recognized. Its name is JYNNEOSTM. This vaccine is also known as Imvaimmune or Imvanex.

This vaccine has been used in Africa. Its use has shown that this vaccine is 85 percent effective against monkeypox virus. According to the UK Health Protection Agency, the monkeypox vaccine can be used both before and after infection.

When the monkeypox virus spread in America in 2003, the smallpox vaccine was used for monkeypox. Then it was recognized.

How do you catch monkeypox?

The monkeypox virus spreads when you come into contact with an infected person or animal. Blood, bodily fluids, or pox lesions (sores) from infected animals can transmit the infection from animal to person through broken skin.

Monkeypox is less common, but it can spread between people. In person-to-person transmission, you obtain the infection from cuddling with, kissing, or sexing with someone who has sores, scabs, or respiratory droplets. Researchers are not sure if the virus is transmitted through semen or vaginal fluids, but research is ongoing.

It is also possible to acquire monkeypox by coming into contact with recently contaminated materials like clothing, bedding and other linens that have been used by an infected individual or by an animal that has been infected.

Monkeypox virus is not very dangerous because its treatment is possible. According to the UK Health Protection Agency, the monkeypox virus does not spread easily. Other infectious diseases spread quickly but it takes time.

The last time this virus was spread, the average transmission of the virus from an infected person was between 0-1 person. This suggests that the level of spread of the monkeypox virus is very low.

According to Dr. Head of the University of Southampton,

According to Dr. J Hooper of the US Army Medical Research Institute for Infectious Diseases

the infected person does not infect anyone. Rather, this virus goes from animals to humans.

According to the WHO

monkeypox virus has a mortality rate of 0 to 11 percent, of which young children are more prone to it. It spreads only when a person comes in contact with an infected animal or infected person.

In 1958, this virus was first found in a monkey in Africa. That’s why it got the name Monkeypox. There have been small outbreaks in African countries since the 1970. Cases of this virus were reported in the US in 2003 and this was the first time that monkeybox cases were seen outside Africa.

This virus in humans of America came from animals brought from there. A total of 81 cases were reported in the US at that time and no human had died. In 2017, the virus was most prevalent in Nigeria with 172 cases reported in Nigeria and 75% of the victims were men between the ages of 21 and 40. We can say that it is a rare virus infection that does not spread rapidly and usually does not cause serious illness.

Health officials have made its vaccine and treatment available in both countries. The health agencies of the countries have said that they are focusing on the new cases coming to the fore of this virus. But it cannot be said that this time the outbreak of monkeypox will be more or less than last time.

Never before have there been so many cases of monkeypox virus in other countries outside Africa and it is not necessary that the travel of people from Africa to other countries is the cause of this infection. This virus is spreading through infected animals.

About of monkeypox Virus

Monkeypox virus is a common disease for the people of Africa but now this virus is spreading from the world to other countries as well. The virus has spread to 11 countries. Especially in this America, Canada and European countries.

There is not much outbreak of this disease but its cases have created fear in the world, after all what could be the reason for getting this virus after so many years? About this, the scientists said that not much information has been found about it. But this virus has become a matter of concern among the people.

Health officials say that there is no need for the general public to panic as the risk of monkeypox to the general public is very low and the virus does not spread easily. Michael Head, who researches health matters at the University of Southampton, says that not much is known about why this virus is spreading.

Former Soviet scientist Colonel Kanat said in an interview that in the 1990s, the Soviet Union wanted to use monkeypox as a bio-weapon.

When the corona virus came, nothing was known about what this virus was, but monkeypox has come many times before. Vaccines have been made available for this and doctors have also experienced this disease. Now epidemiological monitoring and surveillance systems are modernized so that viruses can be easily identified. Any virus can be detected from this system.

According to the authority, even though this virus is not so dangerous, but every effort should be made to stop it so that this virus does not spread further. According to the authority, viruses keep mutating and new strains of them keep appearing. When the cases of corona virus were reported then the question was where did this virus come from and how did it come. Theory has told about monkeypox that this virus has come from animals to humans. However, it is not yet known which animal is infecting humans.
The people of Africa have been affected by the monkeypox virus for many years. The virus was first detected in monkeys in 1958, then the virus was named monkeypox. But some research suggests that before monkeys, this virus was found in munching animals.

Simon Clark, associate professor of cellular microbiology at the University of Reading, told the Science Media Center that until the 1950s, the disease was only in monkeys, but by the 1970s the virus had spread to humans.

How do I take care of myself?

You may feel better if you take the following over-the-counter medications if you have monkeypox symptoms:

This leads to the conclusion that the virus has spread to the countries and is still spreading. But be careful not only with clothes but also avoid coming in contact with any infected person. Take care of the food items, do not use anyone’s used clothes. Do not approach any animal standing near anyone and you can avoid it in many ways like this. Its treatment has been described above.

By reading the above mentioned things, you can get help to a great extent. If there is any kind of change in your health, such as sore throat, fever, severe headache, muscle pain, bone pain, if you have any kind of problem with any of these symptoms, then contact the doctor immediately.

This virus spreads very slowly, so you do not need to be afraid much. But still try to avoid this virus. Being a rare virus, it does not affect you very much and seriously. The effect of this virus starts decreasing in the body after 21-25 days and after which with the help of treatment, it can be cured in three or four weeks.

Many people are comparing it to smallpox but this virus does not spread dangerously fast to conquer smallpox.

Ans – Infection with the monkeypox virus causes monkeypox, a rare disease. Vaccines against smallpox and monkeypox are made using variola (smallpox) viruses and vaccinia viruses that belong to the Orthopoxvirus genus.

Q. From which country did the monkeypox virus start?

Q. Where did this virus come first?

Q. When did this virus come in monkeys?

Q. Did monkeypox come to humans?

Q. What is the name of the monkeypox vaccine?

Q. Is the smallpox vaccine successful against the monkeypox virus?

Ans – Yes, Because both have similar symptoms.

Q. How is monkeypox transmitted?

Q. From which animals does the monkeypox virus spread?

Q. After Africa, which country did the monkeypox virus reach?

Q. Is there a need to be afraid of monkeypox virus?

Ans – No, its treatment is possible.

Q. Where is the monkeypox virus most common?

Q. For how many days does Monkey Pox stay in the human body?

If you liked our article today, then share it as much as possible so that people can know about monkeypox virus. Get information about its symptoms and in case of illness, it can also be treated properly. Its vaccine is available. Therefore it is possible to diagnose it.